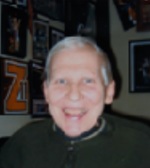 Gintautas Snieckus Aras, known as Gintas Aras
With sadness, the Aras family announces the passing of our beloved
father, Gintautas Snieckus Aras, known as Gintas Aras, who was 80 years
old. Mr. Gintas Aras was born in Baisogala, Lithuania on June 18, 1940,
the youngest child in a family of three children.
His parents, Juozas and Kazimiera Snieckus, nurtured respect for ecology, agriculture and
forest conservation. At the onset of the Second World War, Russian troops assaulted their
village, and the Snieckus family sought refuge in Prussia. They escaped with their children,
and after several years in a displaced persons camp, the family immigrated to the United
States, where they settled within the St. George’s Parish neighborhood on the East Side of
Cleveland, OH
As a nine-year old, non-English speaking child at St George’s School, Gintas developed his
unique talent for languages. He learned the English language, and later graduated from the
distinguished Cathedral Latin High School, a Catholic college preparatory school for boys.
As an alumnus, he excelled in mathematics and science throughout his life. Gintas earned a
Bachelor's of Science in Biology from Kent State University and while there, he formally
changed his last name to conform with American pronounceability and practicality at that
time.
Upon graduation, Gintas Aras found positions in chemistry and laboratory settings
throughout Northeast Ohio. He followed a long-term career and was selected for research
and development projects at the Eveready-Energizer Company.
As a member of the Ciurlionis Ansamblis, a Lithuanian folk dance and music group, Gintas
traveled to Caracas, Venezuela where his talent for languages flourished. There, in Caracas,
Gintas met the love of his life, the beautiful and selfless Maria Magalys Villalobos Trujillo.
They shared a mutual respect for ecology, music and folk dance. For many months, Gintas
corresponded with Maria perfecting his command of written Spanish, and eventually he
returned to Venezuela where they exchanged vows of marriage. Gintas and Maria settled in
Cleveland, OH where they raised their children.
Gintas encouraged an understanding of mathematics and chemistry within his family, and
especially his daughter, helping solve word problems and giving her a foundation in higher
mathematics and chemistry equations. With his son, Gintas shared a respect for ecology and
nature while scouting and camping. He invited his family to enjoy Ohio’s lakes and forests.
Gintas bought a sailboat, and introduced his children to sailing at Pymatuning Lake in rural
Ohio. Through family outings he fostered his children’s appreciation of forest conservation,
the Great Lakes, and sailing.