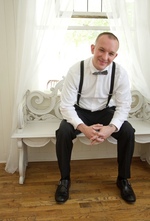 Stephen Michael Sabat, age 31 of Wyoming, MI died unexpectedly on October 5th, 2020.
The visitation will be held Sunday, October 11, 2020 at the Jakubs & Son Funeral Home 936 E. 185th Street Cleveland, from 1-5pm.
Stephen was born in Mayfield Heights, OH on September 1st, 1989. Stephen was married to Alexis on April 14th, 2017.
Stephen survived his wife Alexis and his son Theodore Sabat. He is also survived by his mother, Donna and his sisters, Susan and Margaret.
Stephen was preceded in death by his father, Michael Sabat and his sister, Caroline Sabat. Stephen was a loving father, husband and son and will be missed.